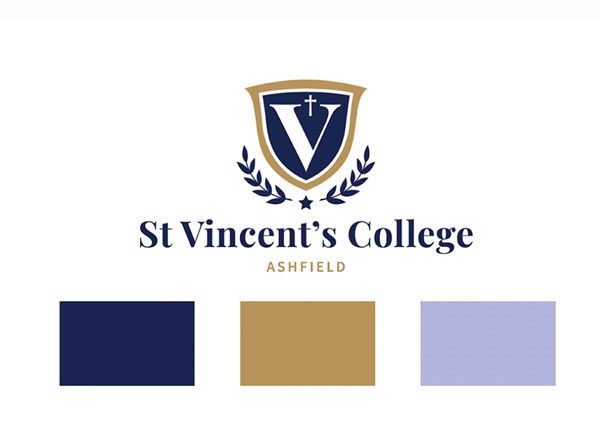 Sydney Catholic Schools is excited to reveal the crest and colours for St Vincent’s College Ashfield.

The crest and colours have been carefully crafted to reflect the College’s future-focused outlook while maintaining and respecting the esteemed history and unique identity of our three Ashfield schools: St Vincent’s Catholic Primary School, Bethlehem College and De La Salle College.

The colours of St Vincent’s College have been adopted from the three existing schools—gold from St Vincent’s Catholic Primary School, navy from De La Salle College and lavender from Bethlehem College.

Following an extensive design and consultation process, a new college crest has been created which incorporates elements of the amalgamated schools together in a contemporary style that speaks to the College’s bold vision.

A centred ‘V’ denotes the school patron Saint Vincent de Paul, while a five-point star and an elevated cross—symbols shared by the three schools—allude to Christ being at the centre of faith and education.

A wreath of olive branches—which also features in the De La Salle College crest—speaks to the College’s vision of creating a just and equitable world, and appears alongside a gold shield of faith that represents the College’s ‘Church to the World’ motto.

The revealing of the crest and colours comes as the College’s inaugural leadership team was also announced this week.

Watch a video of the College identity story below.